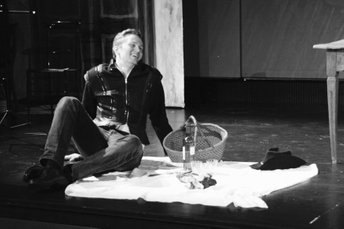 Jakob Vad finished his studies at the Royal Opera Academy in Copenhagen in 2012 with further studies at Madrid Opera Studio in 2014.

As a freelancer, he regularly works with at main theatres in Denmark.

Over the past years he has sung a number of roles with the Royal Theatre in Copenhagen – most recently The Hunter Jan in the production of The Fairy in the Stream.

He has performed the role of Schaunard in La Bohème at Opera Hedeland aswell as the role of Karl in the contemporary opera Nothing by David Bruce at The Danish National Opera. With the Copenhagen Opera Festival he sang the roles of Bretigny in Manon and Mephistopheles in Faust – for which he was awarded the Opera Talent of the Year prize.

Jakob has also been in high demand abroad. He has performed main roles such as Guglielmo in Cosi fan Tutte and Figaro in Nozze di Figaro with Hamburger Kammeroper aswell as the title role of Don Giovanni in Bonn, Papageno in Die Zauberflöte at Cuenca Opera in Spain and Albert in Werther in Russia at the Irkutsk Opera Festival.

During his career, Jakob has had the pleasure of singing together with famous singers such as Patricia Petitbon, Ann Petersen, Susanne Resmark, Johan Reuter, Stella Grigorian, Mindaugas Zimkus and Francois Borras. He has worked with some of the leading opera conductors, such as Robert Reimer and Friedemann Layer.

He has sung the bass parts in most of the famous sacred works like Mozarts Requiem, Händels Messiah and Bach St. John Passion and Christmas Oratorio in collaboration with numerous of the most important orchestras and conductors I Denmark and Scandinavia. Amongst them the Danish Radio Symphonic Orchestra, Copenhagen Phil., Odense Symphonic Orchestra and Trinitatis Orchestra, led by conductors such as Michael Bojesen, Helmut Rilling and David Björkman.

Although doing the majority of his work within sacred music concerts and opera productions, Jakob has a love for songs and lied-cycles. In collaboration with pianist Elisabeth Holmegaard Nielsen, he has performed a range of concerts home and abroad, namely with music by famous Danish composer, Carl Nielsen.

Jakob Vad has received several grants and scholarships including the prestigious Richard Wagner Scholarship for the Bayreuth Festival and Van Hauns Prize – one of the most significant prizes for young artists in Denmark.